U.S. Representative Veronica Escobar (D-TX) sat down with The Century Foundation’s Danny Weiss to talk about the importance of recognizing binational communities like El Paso, the benefits of diversity in the Democratic caucus, and how to bring about much-needed change for the people of marginalized communities.

Read a full transcript of the conversation with Representative Escobar below.

Representative Veronica Escobar: We are warm, we are generous, we are the epitome of what makes America wonderful.

Danny Weiss, The Century Foundation: What’s it like living on the U.S.–Mexico border?

Escobar: The beauty of a region like El Paso is that it is a bi-national region, and you have people who live and work on each side of the border. It truly is one community, and that one community is dependent on each side of that river. The people, the institutions, the facilities, the assets. We are one, and when we have people, or policies, trying to divide us, it’s damaging.

Weiss: Why is higher education so important to border communities?

Escobar: In communities like mine, communities on the U.S.–Mexico border, communities that have a high number of minority students, universities and community colleges and technical institutions are critical. They are the key to accessing the middle class. So Congress has a role in making sure that opportunity is accessible to everyone. We want to make sure that we tear down walls, that we tear down barriers, and that people in communities like mine have that access. They do better, and we all do better when they do better.

Weiss: Why does it matter who makes policy in Congress?

“When we see a group of people coming together, having rigorous debate, having important discussions, with different perspectives, ideals, that is exciting. That’s what America looks like.”

Escobar: Diversity in the Congress is critical. I don’t want to get too political, but when we see a certain party step in line and follow a single person, I don’t think that’s good for democracy. I don’t think that’s healthy. When we see a group of people coming together having rigorous debate, having important discussions, with different perspectives, ideals, ideas, that is exciting! That’s what America looks like. And we get much better public policy, policy that actually improves people’s lives, instead of policy that represents one narrow view. So what’s happening right now, sometimes it’s described in the media as division among the caucus, or division among the party, I see it as America. I see it as this great, exciting public debate.

Weiss: What’s your headline of the future, Congresswoman Escobar?

Escobar: My headline of the future is: The Border Leads in College Graduation Rates, Innovation, and Jobs 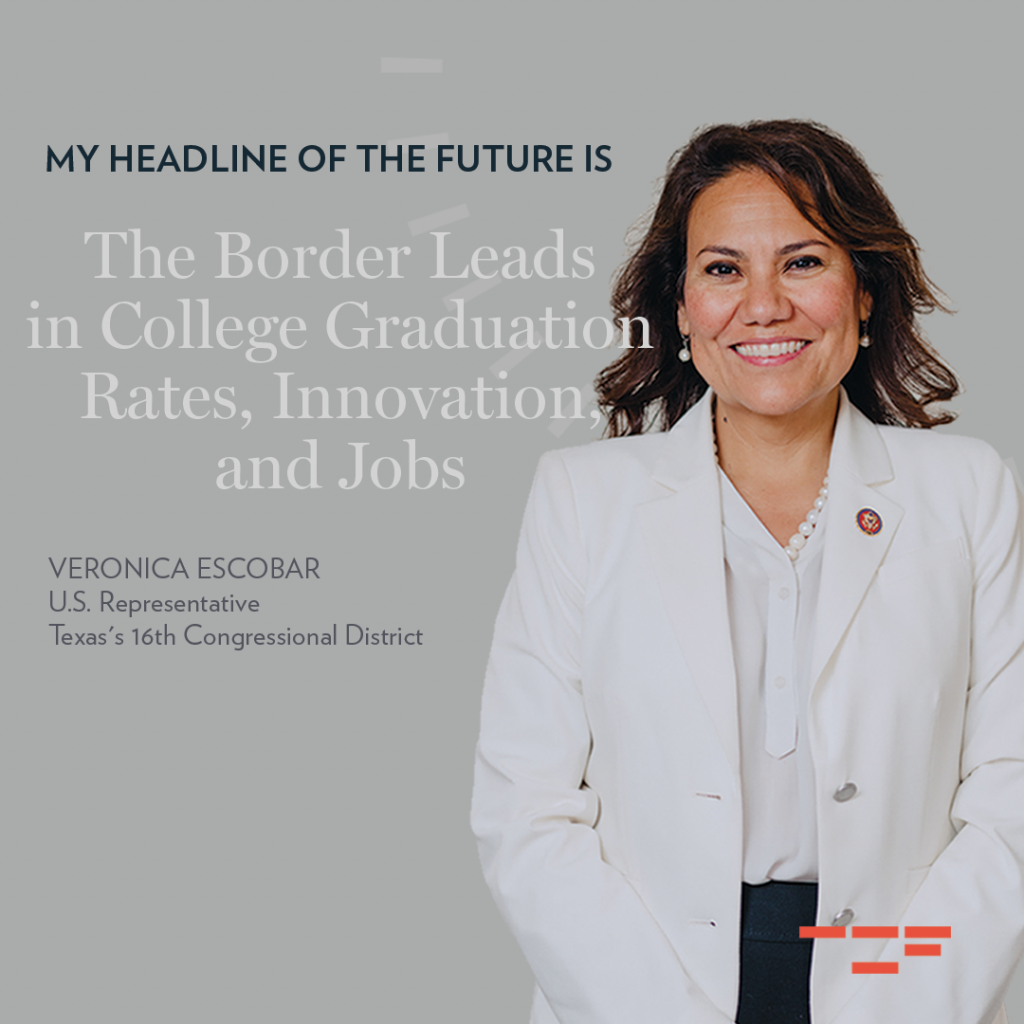