Rights & JusticeDemocracy
Rep. Joe Neguse Wants to Get Young People to the Polls

House Representative Joe Neguse (D-CO) sat down with The Century Foundation’s Danny Weiss to discuss the importance of civic engagement, what young people can accomplish when they make their voices heard, and his personal experiences organizing students and as the child of immigrants.

Read a full transcript of the conversation with Representative Neguse below.

Representative Joe Neguse: I think young people can change the world, if they make their voices heard.

Danny Weiss, The Century Foundation: When you were a kid, did you ever think you would run for Congress?

“I think young people can change the world, if they make their voices heard.”

Neguse: I’ve always been an observer of the political process and have always been particularly interested in politics and in public service. My parents, as you know, were immigrants to this country, came here as refugees. At a very early age, they taught us to give back to the community and to the country that had given us so much. One of the ways that you could do that was through public service.

Weiss: Tell us about the nonprofit you started in Colorado.

Neguse: Back in college, with a number of my friends, I should say, right after college, began to get politically involved. We learned quickly that young people were just were not voting at the rates that that they ought to be voting at. So we decided to create a nonprofit organization that was designed to get more young people in the political process, irrespective of one’s political affiliation. Just wanting to get more people to cast their ballot, be civically engaged. That organization helped enact a law at the state level in Colorado to push for pre-registration of 16 and 17 year olds.

Weiss: Why does it matter if young people vote?

Neguse: It makes such an incredible difference, in order to set the agenda, people have to make their voices heard. You transmit your policy priorities, as a voter, to the policymakers by virtue of who you vote for and how you vote. If young people are not voting, their issues—the issues that they care about, the issues that will most acutely impact them—are unlikely to be at the top of any policy agenda. To me, issues like fighting climate change, which, of course, will impact my generation and my daughter’s generation—as you know, my wife and I have a 10 month old daughter—that’s an issue that we are going to be grappling with for the rest of our lives and then she will be grappling with for the rest of hers. Student debt is another issue: we have over a trillion dollars worth of student debt outstanding in the economy, a lot of young people who are carrying around an anchor as they try to participate in our economy, buy their first home, and so forth. That’s just not an issue that’s going to bubble up and permeate into the the top of the policy priorities of the Congress, or of the Senate, or of state capitols across the country if young people aren’t making clear that it’s a policy priority for them. So it matters a great deal.

Weiss: What’s your headline of the future, Congressman Neguse?

Neguse: My headline of the future is: 100% Voter Participation Nationwide 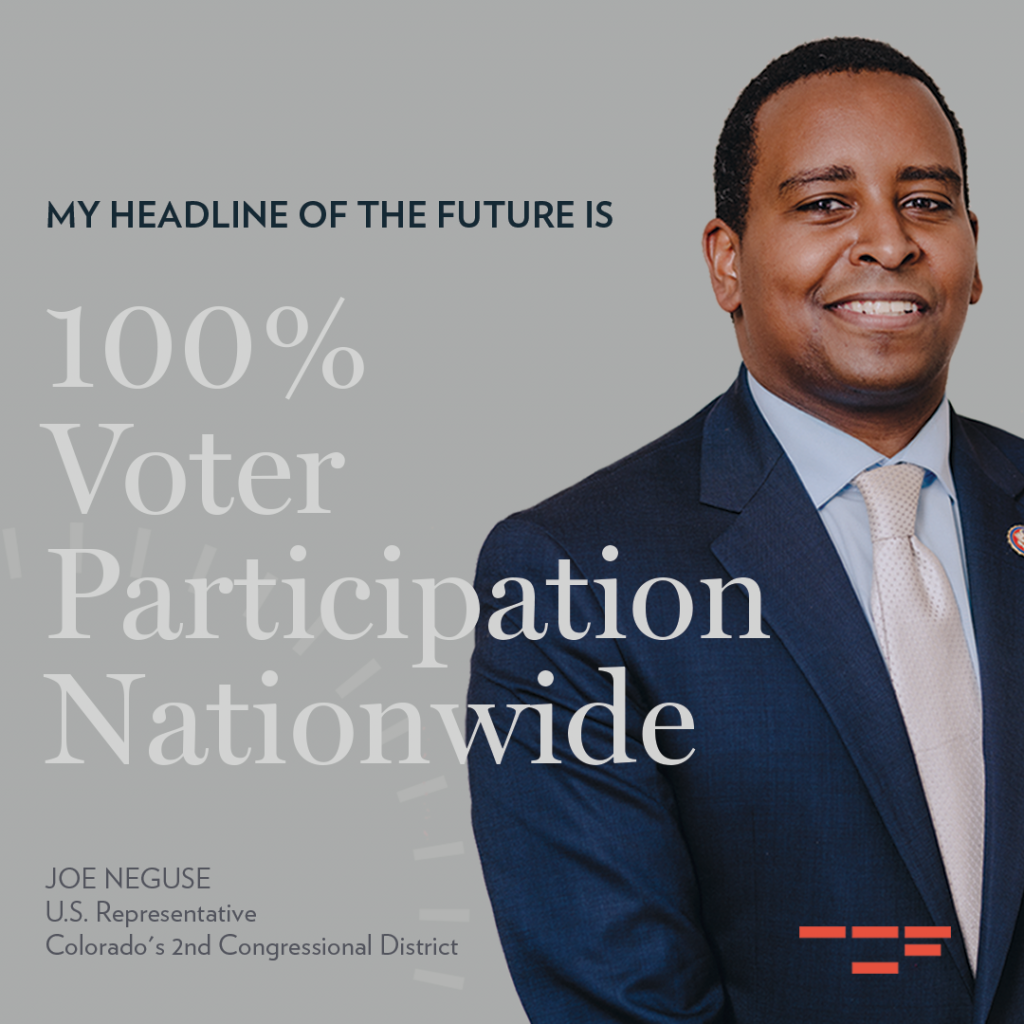