After four years of siege and deadly urban warfare, the Damascus suburb’s residents finally submitted to a deal to evacuate the town on August 25. Within days, Darayya’s remaining rebels and civilians had been bussed out, with rebels headed to opposition-held Idlib province in Syria’s north and civilians to another Damascus suburb for resettlement.

The loss of Darayya is a watershed in Syria’s war. For many in Syria’s opposition, Darayya represented the best of the Syrian revolution—a bastion of civil activism and nationalist, “Free Syrian Army” rebels that held together and persevered for years against overwhelming odds, even as rebel-held areas elsewhere slid sideways into jihadism and factional infighting. For the regime of Bashar al-Assad and its loyalist base, Darayya was an intractable menace to the capital Damascus, sowing insecurity and violence only miles from the heart of the city and the Presidential Palace.

It was through Darayya that Syria’s southern rebels penetrated Damascus in 2012 and 2013. Now the threat of a rebel march on the capital is decisively over.

Darayya meant vastly different things to each side of the war, but people from both sides who spoke to me seemed to recognize the town’s fall as a harbinger of regime victory on what is arguably Syria’s most important front—the heavily populated and economically critical western corridor running down Syria’s Mediterranean coast to Damascus, sometimes called “useful Syria.”

The Significance of this Regime Victory

Darayya is a key win in the regime’s campaign to besiege and subdue the last rebel pockets within this area. The government’s victory in Darayya is a validation of this strategy, signalling that the regime—with no one willing or able to stop it—is still capable of outright victory on its most vital home territory, however long it takes and whatever the human toll.

The remaining rebel enclaves inside the regime-held west have already been isolated and, for the most part, neutralized militarily. Now with the defeat of Darayya—an emblem of the most determined resistance to the regime—the regime seems poised to further consolidate its hold on Syria’s south and center. The end of Darayya is another step towards a rebellion that is no longer national but regional, centered in northern Syria and increasingly dominated by the north’s jihadists and Islamists.

Yusha Youssef, a reporter and editor for pro-government news site Al-Masdar News, told me the loyalist public was celebrating the Darayya win, although some resented that rebels had been allowed to leave alive for northern Syria.

Youssef, speaking to me over Twitter from Damascus, said residents of the surrounding Damascus countryside who had been shelled from Darayya could now enjoy “a glimpse of hope and some space to breathe.”

“[It’s a reason to believe] there can be a solution, no matter how long this crisis drags on—that there’s hope.”

“It’s a relief for other areas, too,” Youssef told me. “[It’s a reason to believe] there can be a solution, no matter how long this crisis drags on—that there’s hope.”

Sariyyah Abu Obeidah, a political officer in Darayya rebel faction the Martyrs of Islam Brigade who uses a pseudonym to protect his family inside the Syria, described a starkly different message in the fall of Darayya.

“Darayya had been resisting for four years,” Abu Obeidah told me over WhatsApp, speaking from Istanbul. “So when Darayya is gone, thanks to this settlement, it sends a message to everyone [in Syria’s besieged rebel areas] that even if you hold out for four years, nothing will happen.

“The international community won’t be able to do anything,” he went on. “Humanitarian organizations won’t be able to get you food or water. [The regime] will keep bombing you, and even if the city is totally destroyed and everyone is killed, no one will answer [your calls for help].”

“If the international community doesn’t really step in, without a genuine effort from humanitarian organizations, these people will end up like this,” he said.

Amid Intensified Attacks, Rebels Forced to Take a Deal

The situation in Darayya started to worsen early this year after the regime cut it off from the neighboring town of al-Moadhhamiyyah, through which Darayya had secured supplies. Then—minus a brief intermission during the nationwide “cessation of hostilities” that began in February—the regime intensified its campaign to retake Darayya. It bombed the town relentlessly from the air and made critical new gains inside the city, capturing some of the farmland locals had used to sustain themselves under siege.

Ultimately regime forces penetrated rebels’ last lines of defense, and rebels—exhausted, short of ammunition, and fearful for family members caught with them inside the siege—were left with little choice but to take a deal.

Sources familiar with negotiations between Darayya residents and the regime said offers and counter-offers for an exit from the city had gone back and forth for months. At the end, though, rebels had to either take the deal or be overrun and wiped out.

Syrians negotiated the agreement among themselves. United Nations officials said they played no role in the negotiations, but according to participants, the UN helped with final arrangements to evacuate civilians and fighters from Darayya.

The Darayya deal was exceptional in that it involved none of the halfway, compromise terms we’ve seen elsewhere in Syria. Locals did not retain partial autonomy, and rebels did not surrender their heavy arms and remain on as a local auxiliary security force. Rebels were allowed to leave with their individual small arms and given safe passage north, but what was left of the town was totally emptied.

Darayya overlooked Mezzeh Military Airbase, which the town’s rebels would shell, and sat amid other key regime military facilities, including the base of the elite 4th Armored Division. Now a deadly threat in the middle of the regime’s most sensitive military and government infrastructure has been eliminated.

For the opposition, Darayya was a hub for revolutionary activism and protest that had paid a terrible price for its resistance, including in August 2012, when regime forces stormed the town and killed hundreds of residents. After a pitched battle for the town in late 2012, nearly all of Darayya’s original 250,000 residents fled. But the few thousand rebels and civilians who remained, encircled by the regime and driven partly underground, kept up the town’s activist spirit.

The town’s local council was considered a national model that perhaps uniquely among Syria’s opposition-held areas exerted some civilian oversight over the town’s rebel brigade, the Martyrs of Islam. And the Martyrs of Islam were an iconic example of Syria’s non-jihadist “Free Syrian Army” rebels. Through years of urban warfare, they cost the regime hundreds of men and ensured the town was one of the regime’s deadliest, most costly fronts.

How Did It Happen?

Within the opposition, recriminations for the fall of Darayya began well in advance. The rebel Southern Front coalition, to which the Martyrs of Islam Brigade belonged, has been blamed by many for acquiescing to Jordanian pressure and letting its front lines to go quiet, allowing the regime to redeploy its forces to Darayya.

Speaking to me over Skype from Amman, Southern Front spokesman Issam al-Rayyes disputed these criticisms. The Southern Front had been unable to help, he said, but so had other rebel factions closer to Darayya. 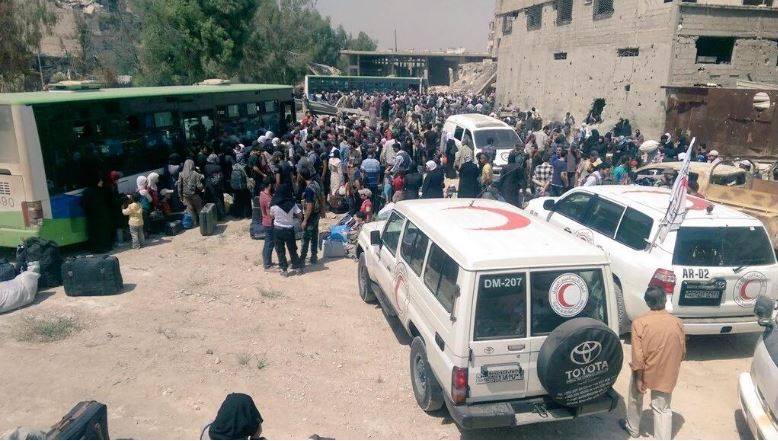 He argued that the story of Darayya was the years of resistance by the town’s rebel “heroes,” not their ultimate evacuation. “At the end of the day, we don’t want this victory we achieved against the regime to look like a defeat because we are accusing each other,” he told me.

But there is blame to go around, and the loss of the town has been cast as more of a defeat for the opposition writ large than for Darayya’s fighters.

Martyrs of Islam officer Abu Obeidah attributed the fall of Darayya not just to the quiet in Syria’s south, but also the inability of a divided Syrian opposition to cohere around a unified national vision.

Martyrs of Islam officer Abu Obeidah attributed the fall of Darayya not just to the quiet in Syria’s south, but also the inability of a divided Syrian opposition to cohere around a unified national vision. And he blamed the United States and the other “Friends of Syria” for unwillingness to apply real diplomatic or military pressure on the regime to relieve Darayya. He called Darayya “a victim of the political process” now being sponsored by the United States and Russia.

In June, the regime yielded to international pressure and allowed the first shipment of food to Darayya in four years, but it was only enough to feed a fraction of the town’s population for less than a month.

“People were left with no hope, after four years and in light of these international institutions’ total inability to bring in food,” Abu Obeidah told me. “After one more year, people might just die.”

Yet there seems to be only so much anyone can do to deter the regime, which has settled on a strategy to reconquer its heartland—a strategy that, no matter how macabre, appears to be working.

“This policy of siege and starvation is successful,” said Abu Obeidah. “That’s a message that’s been delivered to the countries against the revolution, that defend the regime when it’s attacked for besieging people.”

Al-Masdar journalist Youssef told me the siege had crippled Darayya’s “militants.” “They had collapsed in terms of morale, as well as in material and military terms,” he said. “The siege was suffocating.”

The fall of Darayya is a grim portent for remaining besieged opposition areas. For Damascus towns like al-Moaddhamiyyah and the Homs city neighborhood of al-Wa’ar, it seems there is no help—not Syrian, not international—on the way.

If the Southern Front in particular has been declawed because of regional political considerations—as now seems to be the case—these areas on their own.

Since Darayya’s capture, both al-Moaddhamiyyah and al-Wa’ar have reportedly been presented with “Darayya-style” deals that will restore functioning state institutions and require the evacuation of all irreconcilable rebels to the north. It seems unlikely the regime will attempt to entirely clear these areas and others like them, or to mount another full-scale, Darayya-type military campaign—but the threat is there. Those I spoke to expected besieged towns and neighborhoods—including those that have already agreed to truces or “reconciliations”—would face pressure for new, more far-reaching concessions. With enough time, the regime seems set to end even the patchwork semi-autonomy to which these areas have submitted.

As for Darayya, the Syrian state has made some noises about a new beginning. In a visit to the town, Damascus countryside governor Alaa Mounir Ibrahim said, “God willing, we want to see a civilized city, an exceptional city here in Darayya. We want to forget the terror we saw here.”

Yet Darayya is now a mostly vacant ruin, and rebuilding and repopulating the town—even if the regime had the resources for reconstruction—seems unlikely to be a priority.

And Darayya is probably a more potent symbol left as is. For years, the town was emblematic of the revolution and its resilience.

Now a destroyed and empty Darayya represents the regime’s march to victory on its home territory—grinding, ugly, but seemingly inexorable.

Sam Heller is a Beirut-based researcher, analyst, and fellow at Century International. Sam’s work focuses on politics and security in Lebanon, Syria, and their regional neighborhood. He has published extensively with International Crisis Group and The Century Foundation and for outlets including Foreign Affairs, War on the Rocks and The Daily Beast.