What You Should Know

Before the Trump administration adopted policies undermining the Affordable Care Act, the ACA’s marketplaces were working well where there was competition, but faced high and rapidly increasing premiums in areas with only one or two insurers or a limited number of providers. Without significant competition, insurers have little incentive to negotiate lower payment rates for hospitals and doctors, and when a provider system is essentially a monopoly in a region, even a well-motivated, dominant insurer has little negotiating leverage. One answer some people have suggested for these problems of high premiums and concentrated market power is to create a public option—a government-run plan to compete with private insurers. We suggest a simpler and more politically feasible approach that has had a record of success and bipartisan support in the Medicare program.

The Medicare program allows private insurers to compete with traditional Medicare. The option, known as Medicare Advantage, has been attractive to many insurers, including large national insurers, and it now serves about one-third of all Medicare beneficiaries. Private insurers’ premiums are set in relation to a benchmark determined by the costs of the traditional Medicare plan in a region. Insurers charge beneficiaries higher premiums if the insurers’ average costs are above the benchmark, and they charge less or provide additional benefits if their average costs fall below the benchmark.

A key provision in Medicare Advantage is that it does not allow “balance billing” by providers, even if they are out of network. In other words, out-of-network providers cannot charge beneficiaries more than Medicare rates—a cap that has had the effect of constraining rates for in-network providers as well. Limits on payment rates for hospitals and doctors have not only kept down costs to seniors but also enabled commercial insurers to compete effectively with the traditional Medicare program. If this policy were applied to all insurance in the individual (or nongroup) market regulated by the ACA, providers could not demand any more than Medicare rates (or Medicare plus some percentage Congress approved). This approach would control costs in areas where premiums are high, and it would reduce barriers to entry for insurers in markets where monopoly conditions currently exist. 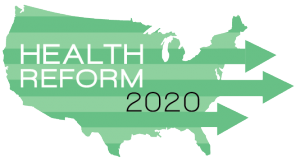 Read all of the articles in the Health Reform 2020 series, co-produced by The Century Foundation and The American Prospect.

The ACA sets up online marketplaces where individuals can easily compare coverage options and, if eligible, obtain financial assistance in the form of premium tax credits and cost-sharing reductions. The premium tax credits cap how much people eligible for assistance pay for coverage as a percentage of their family income. The ACA allows for a range of plans, varying in the proportion of average medical costs they’re expected to cover, from the low, bronze level (60 percent) to silver (70 percent), gold (80 percent), and at the high end, platinum (90 percent). If enrollees choose a plan that’s more expensive than the second-lowest-cost silver plan, they pay an extra amount, while they pay less if they choose a cheaper silver or bronze plan.

Since the structure of the premium tax credits creates strong incentives for enrollees to choose lower-premium plans, many markets have seen intense competition to be one of the two silver plans with the lowest premiums. Markets with relatively large populations are more likely to see competition of this kind, which often includes Medicaid managed-care plans, Blue Cross health maintenance organizations (HMOs), and plans sponsored by local providers. These plans frequently have narrow networks because plans can negotiate lower payment rates by being selective in an area with abundant providers. Research has shown that the more competing insurers there are, the lower premiums and premium increases tend to be.

Many high-cost markets have only one or two participating insurers or only a limited number of providers, or both. These are often in less-populated states, or sub-state areas, where providers can set their payment rates, knowing that if an insurer declines to pay them, enrollees will have no accessible hospital or doctor. A similar pricing power dynamic can occur in more-populated areas that have a “must-have” hospital system (a system that controls leading hospitals and a large share of the market). And even if insurers do have the ability to negotiate lower payment rates, they may not face competition from other insurers and consequently have little incentive to hold down prices. In many areas, particularly in less-populated areas and in much of the South and West, insurers have exited the marketplaces in large numbers, often leaving a single Blue Cross plan dominating the individual insurance market, as it did long before the ACA.

A variety of policies are needed to address these problems. Policies that expand enrollment—including more outreach and enrollment assistance and more generous premium and cost-sharing subsidies—would also enlarge markets that are currently too small to attract and support competing insurers. A permanent reinsurance program would bring down premiums for many, addressing areas where markets suffer from adverse selection. But while these and other measures would make sense, they would not reduce the problems stemming from the concentrated control of insurer and provider markets.

A public option developed particularly for areas with little or no competition would be one way of addressing those problems. Such a plan would likely have many features in common with traditional Medicare, such as a provider fee schedule as well as a broad provider network linked to Medicare participation. Although a public option could enter all markets, it would be less likely to play as significant a role in areas that are already competitive.

But developing a public option would require substantial investment in systems for marketing coverage, signing up enrollees, collecting premiums, and paying claims. A public option would also surely face insurer opposition, as it did during congressional debate about the ACA. Insurers were then, and are still, likely to argue that any government plan would have an unfair competitive advantage and make it impossible for them to compete.

The alternative we propose involves capping payment rates, following the broadly accepted precedent in Medicare Advantage, rather than building new organizational capacities. In plans complying with the ACA, out-of-network providers would be prohibited from billing above Medicare rates (or Medicare rates plus a percentage). That policy would also cap in-network provider rates at the same levels. Insurers able to negotiate lower payment rates could do so, but rates could not go higher. Capping provider payment rates would limit the pricing power of providers, particularly local provider monopolies.

Caps on provider payment rates would also reduce the power of dominant insurers by opening up markets to more competition. An insurer that is new to an area can find it difficult to negotiate with providers when it doesn’t have a large group of enrollees to offer providers in return for discounts. An established insurer with longstanding relationships with doctors and hospitals has most likely negotiated more favorable rates than any newcomer could expect to achieve. Caps on provider payment rates would allow new entrants into a market to offer coverage at premiums closer to those of long-established insurers. In more competitive insurer and provider markets, payment rates may already be below Medicare levels, so the effect would not be as great.

If payment rates were capped as we suggest, some providers might refuse to take patients with nongroup coverage that complied with the ACA. Policymakers could reduce that risk by setting payment rates at some percentage above traditional Medicare. The incentive for providers to participate should be great enough considering the large number of patients and reduced losses from unpaid bills. A public option would face the same potential provider resistance to caps on payment, depending upon the level at which payment rates would be set. In either case, providers could be required to accept nongroup insurance enrollees at capped rates if they wish to participate in Medicare, though that linkage might provoke a strong political reaction. The best approach would be to set payment rates at an intermediate level—below those in noncompetitive markets, but at least modestly above the levels that most providers already accept in Medicare.

Providers will always resist policies that reduce their revenue, but where monopoly or near-monopoly power exists, the only way to bring down high premiums is to limit the high fees that providers are demanding. Capping provider payment rates for nongroup plans could answer a central problem that has arisen with the law, promoting insurer competition and reducing premiums. Policymakers need only look to the example of Medicare Advantage to see how to proceed.

This article was published as part of a special report on health care reform, co-produced with The American Prospect.

John Holahan is an Institute fellow in the Health Policy Center at Urban, where he previously served as center director for over 30 years.

Linda Blumberg is a senior fellow in the Health Policy Center at Urban. She is an expert on private health insurance (employer and nongroup), health care financing, and health system reform.