The United States is the only advanced country in the world that provides no cash benefits to women during maternity leave. But 2016 has been a notable year of progress toward adequate family leave—including both parents and close family members with serious illnesses—in the United States, with New York State passing the nation’s strongest paid family leave program to date, California expanding their decade-old law to increase the wage replacement rates, and the city of San Francisco passing a paid parental leave ordinance. These laws build on existing paid family leave legislation in Rhode Island, New Jersey, and California, as well as the 1993 federal Family and Medical Leave Act (FMLA), which grants certain employees unpaid leave with job protection. However, the vast majority of Americans are still left with no choice but dependency on their employee’s discretion of what fair leave policies are.

There is a plethora of proven benefits that are afforded to individuals with paid family leave, and these assets would only increase from making such policies available to all Americans.

There are significant health concerns during birth and early life for both the mother and the baby. In addition, parent-child bonding is important for health and development. Paid support during this critical time for childhood development would ensure parents don’t have to choose between their children and their financial security.

The critical relationship between a child and his or her parents begins early. It takes three months for an infant to begin recognizing a caregiver’s voice, face, and smell—which applies to adoptive parents as well as birth parents. Approximately 90 percent of a child’s brain development takes place before his or her fifth birthday, making parental involvement during these years crucial. We know that education begins on day one, and activities such as parents reading to their young children, for instance, vastly improves their vocabularies and gives them an educational head start. Paid family leave policies grant parents the opportunity to positively influence their child’s early development.

3. Gender Equity and the Case for Maternal and Paternal Leave 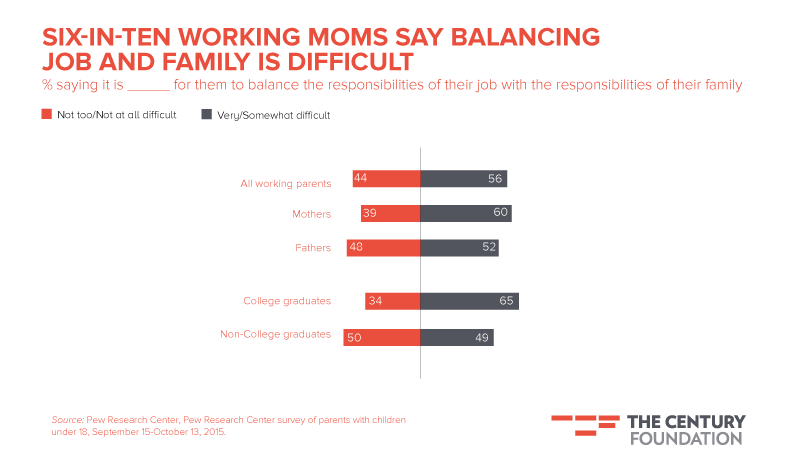 The current lack of federal paid family leave plays into the vast problems the United States has with income inequality.

Who Gets Paid Leave?

Well-paid people who have managerial (or higher)-level positions are the ones who are the most likely to receive paid family leave, even though it is the low-income families—who cannot pay for nannies and daycare—who need it most.

Paid family leave policies can have great positive influence over the economic stability of both individual American families and the United States as a whole.

Economic Stability of the United States

Molly Bangs is a contributor at The Century Foundation, whose writing focuses on women's and human rights as well as social and environmental justice.