Proposals to expand access to public health insurance plans and programs target different groups of Americans. The smallest (which would eliminate Medicare’s waiting period for people with disabilities) could cover 2 million people, while the largest (Medicare for All) could cover 270 million people (see Table 1). The number and nature of who’s eligible under different public plan and program proposals have important policy and political implications.

The backdrop for these health reform proposals is complex. About 90 percent of all Americans have some sort of coverage today, and most are satisfied with their own health care and costs. However, the United States spends more per capita on health care than any other nation, without achieving the best outcomes, and about 28 million non-elderly Americans are uninsured. Another 21 million buy coverage on their own through the individual health insurance market. Nearly half of those people receive federal tax credits to lower their premiums; the remaining half has faced high and rising premiums, in part due to actions taken by Congress and the Trump administration. About 152 million non-elderly people receive employer health coverage. While premium growth has been relatively low since 2010, deductibles in employer plans have continued to climb. The rest of Americans, 119 million, are covered by Medicare, Medicaid, or other public programs (see Chart 1).

The Medicare for All proposal (S. 1804) would replace all private and public coverage (except those plans administered by the Veterans Health Administration) with Medicare. As such, it would add 270 million people to the program (see Chart 2). Medicare Part E and the Medicaid option would maintain Medicaid as a program for low-income and vulnerable populations, but give all other non-elderly people—212 million—or their employers the choice of signing up for these options (Chart 3). Medicare X and the House public option would be a new choice for the 65 to 82 million who are uninsured, purchase coverage on their own, or who work for small businesses (Chart 4). These plans would exclude from eligibility workers and their families in large businesses (with slightly different definitions of which businesses are “large” (see analysis notes)), because these individuals already have the purchasing power of large employers.

Two proposals, Midlife Medicare and a proposed elimination of the Medicare waiting period for people who receive Social Security Disability Insurance (SSDI), would offer Medicare eligibility to discrete populations. Midlife Medicare targets the 16.5 million people ages fifty to sixty-four in the individual market or who are uninsured (Chart 5). Expanding Medicare’s coverage for people with disabilities would cover the 2 million people in the twenty-four month waiting period for Medicare coverage.

It is important to note, however, that these are eligibility numbers and not estimates of actual likely enrollment. This is because the decision to take up a new coverage option depends on many factors. For instance, simply offering a public plan option without financial assistance would lead to little enrollment of the uninsured whose income is disproportionately low. Additionally, these proposals are not uniquely focused on achieving universal coverage, which could be done without a new public plan (e.g., automatic enrollment into private plans).

It is also important to note that these eligibility estimates do not take into account any element of choice: the analysis is static based on 2016 coverage. For example, even though the Medicaid option would theoretically be available to 212 million people, in reality, this would depend on decisions including, first, whether a state adopts this option and, second, whether people choose to enroll in it. While the Medicaid option could offer lower costs, it could also have other limits that make it unattractive to some people when compared to existing private plans (e.g., limited provider networks).

The estimates of eligibility do illustrate the tension between disruption and impact. Expansive proposals not only help more people but tend to lower costs more per person because they create greater leverage in the public program or plan. This leverage has mixed political implications. It may increase the popularity of these plans among advocates seeking bold ideas and more rapid and radical change than what the Affordable Care Act delivered. Conversely, it could cause backlash, given that, as the nation learned in 2013, Americans are hesitant to change plans to something new, regardless of its potential to offer better coverage. This hesitance may foreshadow future opposition to more wide-sweeping public programs given that nearly half of people think they could stay in in their current plan under a single-payer plan. Where to start, strategically speaking, with enrolling people in public plans and programs also matters, because it may be where policy ends if health reform stalls. 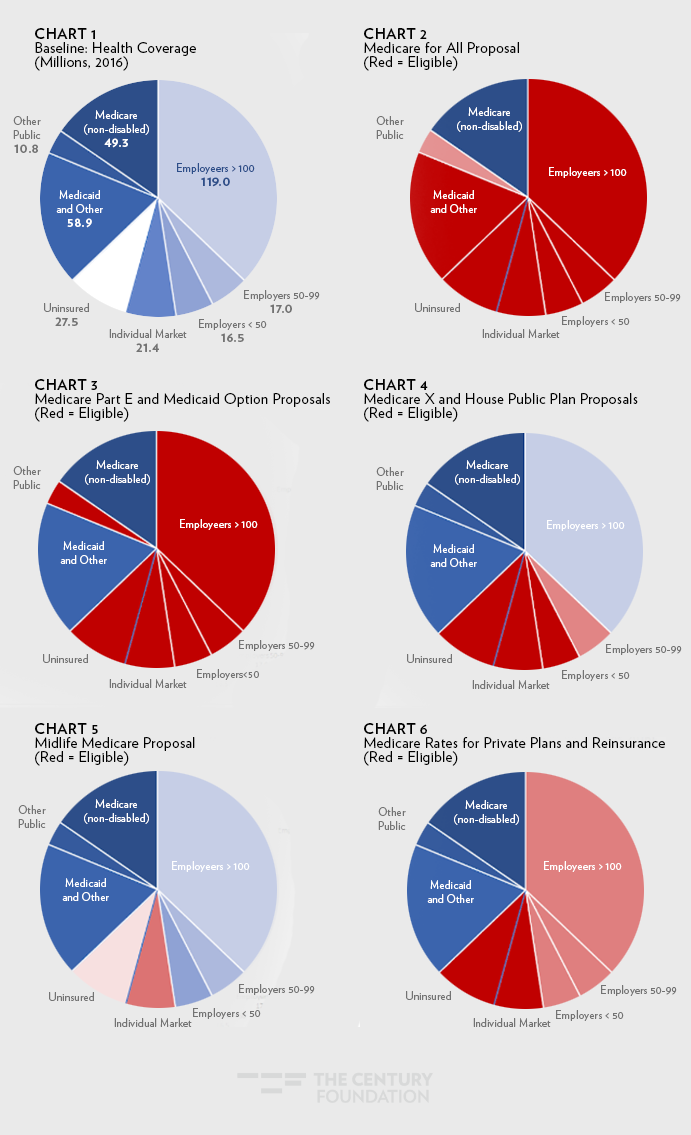 Ellen Montz was a senior fellow at The Century Foundation with expertise in U.S. health care policy, with a specific research focus on health insurance coverage and market regulation. She is currently a PhD candidate in health policy, with a concentration in economics, at Harvard University.

Jeanne Lambrew, PhD, was formerly a senior fellow at The Century Foundation and an adjunct professor at the NYU Wagner Graduate School of Public Service. Her writing, research, and teaching focus on policies to improve health care access, affordability, and quality.