I’m not a real Southerner. For starters, I live in Manhattan. And I grew up in West Virginia—a state that came into existence by refusing to join the slave owners in the eastern half of the state in seceding from the Union.

That said, I have spent all but three years of my adult life in Virginia and North Carolina. I know how to make biscuits and grits, have been drinking bourbon neat since Lena Dunham was in preschool, and I can say things like, “Y’all fixin’ to head out?” with a straight face. So Manhattanite or not, I’m going to speak as a Southerner for a minute.

Look, I agree that Paula Deen is a terrible person. And I stayed up half the night watching Wendy Davis standing up to a bunch of white men who wanted to tell her what she could and couldn’t do with her body. She’s awesome. And I get that heroes—and villains—can serve as rallying points for change.

My complaint is that our obsession with these two Big Southern Personalities is distracting us from the fact there are some amazing things happening down South right now.

Davis has certainly proved herself a rallying point for Texas progressives. But let’s not forget that when Davis’ filibuster fell short, Texas Republicans were ultimately stymied by ordinary citizens who packed the Senate chamber and quite literally shouted down the bill that Davis couldn’t quite defeat on her own.

And Texas progressives haven’t let up since. After Governor Rick Perry called a new legislative session to take up the just-defeated bill to restrict abortion, protestors flocked back to Austin to protest. 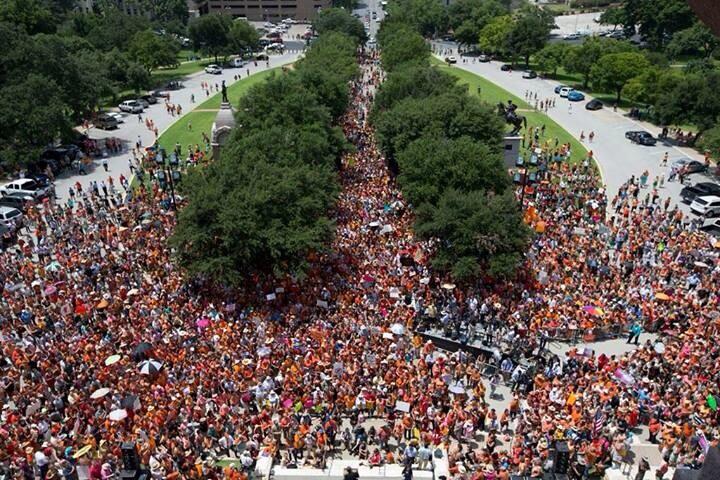 In neighboring Arkansas, citizens are banding together in support of a different progressive cause: Worker rights. Employees of the nation’s largest retailer have staged multiple rallies, strikes, and work protests since the fall of 2012. Last month, protestors descended on the company’s Bentonville, Arkansas headquarters to protest low wages and to call attention to Walmart’s refusal to improve working conditions in the overseas factories that supply the retailer’s clothing.

Meanwhile, on the other geographic end of the Old Confederacy, North Carolina is seeing a similar uprising against a radical Republican agenda. Faced with a legislature intent on turning the Tar Heel state into the only one in the U.S. to refuse federal unemployment benefits for the long-term unemployed, progressives in North Carolina have staged a series of “Moral Monday protests.” Thousands of demonstrators have gathered each Monday since April to protest state cuts to unemployment insurance, health care, and education.

That’s three different grassroots progressive movements in the Old Confederacy. And, yes, I realize that demographics in the South are shifting, and that some have used those trends to suggest that the South in general is purpling. But as my colleague Douglas Williams argued eloquently here on Blog of the Century, rumors of the Old South’s demise are exaggerated. As Williams says:

Until the Democratic Party in the South (with assistance from a Democratic National Committee that has long neglected party building in the South) begins the long, hard work of building an infrastructure of progressive power, organizing, and messaging, they will continue to find themselves losing to Republicans that are very beatable. And if we want Democratic-leaning communities to turn out in midterm elections, we have to give them a reason to do so by fielding candidates who aren’t just a lighter shade of red.

Building infrastructure, organizing, and messaging don’t make for a sexy story. But you don’t get progressive ideas enacted without them. Indeed, there are very real dangers in tying the progressive project too closely to fallible individual politicians (see Obama, Barack; and any of Gitmo, drones, or the NSA). So stop simply talking about the biggest heroes or villains of the moment, and start looking at stories about how this consensus on progressive values can be funneled into results.

The nascent movements starting to take shape in Texas and North Carolina present a real opportunity for progressives to do the messy organizational work needed to take states from red to purple—and maybe even to blue. It remains an open question whether progressives will be too distracted by big personalities to capitalize.