More than three decades after the Americans with Disabilities Act, or ADA, became law, disability remains both a cause and a consequence of poverty in the United States. Many of the persistent barriers to economic security facing Americans with disabilities are the result of policy failures that become visible when we center the perspectives and experiences of the disability community—from inadequate affordable, accessible housing and transportation, to a long history of disinvestment in community living supports, and more. A new report from The Century Foundation and the Center for Economic and Policy Research, “Economic Justice Is Disability Justice,” provides an overview of the economic crisis the disability community was facing long before the COVID-19 pandemic. Here are seven key facts and statistics that offer a snapshot of the barriers to economic justice that disabled Americans face today:

1. Disabled People Are Twice As Likely to Live in Poverty

Disabled people in the United States are dramatically more likely to live in poverty, due to pervasive discrimination and a litany of structural barriers to economic security and upward mobility. In 2019, 21.6 percent of disabled people were considered poor under the Census’s Supplemental Poverty Measure, compared with just over 10 percent of people without disabilities.

Despite the fact that the ADA prohibits employers from discriminating on the basis of disability, in 2020, workers with disabilities (ages 18–64) were paid, on average, 74 cents for every dollar paid to their nondisabled peers. 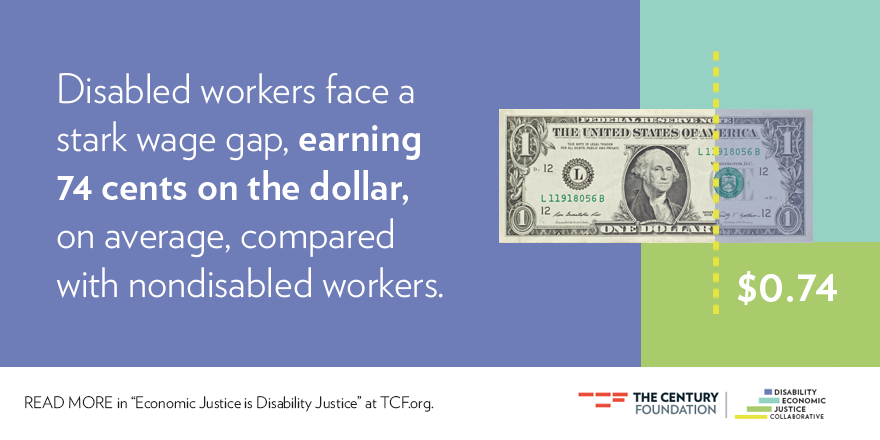 Disabled people of color in the United States face even greater economic disparities and rates of poverty and hardship than white disabled people, due to the compounding effects of structural as well as cultural ableism and racism. In 2020, one in four disabled Black adults in the United States lived in poverty, while just over one in seven of their white counterparts did so.

4. Four in Ten Disabled People Are Struggling to Afford Their Rent

In 2021, nearly 40 percent of renters with any disability experienced housing insecurity—meaning they were struggling to pay their rent—compared with a national average of 25 percent. Disabled Black and Hispanic renters were especially likely to be housing insecure, at 52 percent and 50 percent, respectively.

5. People with Disabilities Are Three Times More Likely Not to Have Enough to Eat

About 8.5 percent of all adults in the United States in the last nine months of 2021 experienced food insufficiency, reporting that they sometimes or often did not have enough to eat in the past seven days. But among adults with disabilities, more than one in five, or 21.5 percent reported food insufficiency—more than three times the rate of their nondisabled counterparts (6.5 percent).

6. Disabled People Are Almost Twice As Likely to Be Unable to Pay Monthly Bills

Adults with disabilities are experiencing economic hardships across many aspects of their lives, including meeting the daily demands of paying bills. Just over half of adults with disabilities said they had substantial difficulty paying their monthly bills—nearly twice the national average of 27 percent. These challenges have only been exacerbated by the COVID-19 pandemic.

7. Nearly Half of All Incarcerated Women Have a Disability

Nearly half of all incarcerated women reported having a disability in 2016. More broadly, people behind bars in state and federal prisons are nearly three times as likely as the nonincarcerated population to report having a disability, while those in jails are more than four times as likely. Interaction with the criminal legal system can spur long-term economic consequences years after someone is released from incarceration, adding to the employment, housing, and other economic barriers that disabled Americans already face.

For more on the persistent barriers to economic justice facing Americans with disabilities today, check out “Economic Justice Is Disability Justice” and learn more about the Disability Economic Justice Collaborative at DEJC.org and by following @DEJCollab on Twitter.

Rebecca Vallas is a senior fellow and co-director of The Century Foundation's Disability Economic Justice Collaborative, where she leads TCF’s work to achieve economic justice for people with disabilities and their families.

Kim Knackstedt is a senior fellow and co-director of The Century Foundation's Disability Economic Justice Collaborative, where her work focuses on economic justice for people with disabilities and their families.

Vilissa Thompson is a fellow and co-director of The Century Foundation's Disability Economic Justice Collaborative, where her work focuses on the intersection of race, gender, and disability justice.