Economic OpportunityEconomics
The Government Might Shut Down. Why Should You Care?

Federal agencies and programs run out of discretionary funding on October 1, 2013, the start of fiscal year 2014, when budget authority appropriated for the previous fiscal year runs out.

Without some sort of stopgap measure, many government programs will simply stop operating at midnight on September 30. It’s of course possible Congress will enact a stopgap funding measure at the last minute. But it’s also improbable, as it would require one political party abruptly and completely capitulating.

Tea Party types might consider shutting down the government a feature rather than a bug. A lot of that sentiment stems from ignorance of exactly how many things the government does for us. Everyone remembers these signs, right? 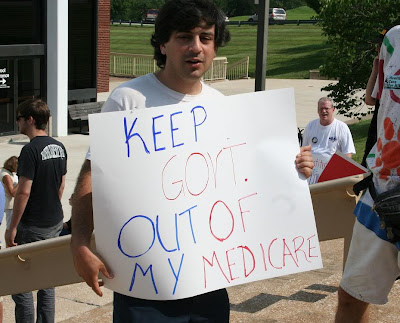 These cases aren’t isolated. My colleague Suzanne Mettler has written about Americans who don’t seem to realize how many government programs they actually use.

So, let’s talk about the repurcussions in the event of a shutdown.

Planning to buy a house with an FHA or VA loan? Not going to happen.

The Centers for Disease Control and Prevention will likely shut down—-just in time for flu season.

Tea Partiers should also note you can’t legally buy a gun while the government is shut down, as there will be no gun permits issued.

A few federal discretionary programs would stay open. For example, any program that deals with “emergencies involving the safety of human life or the protection of property,” (e.g., emergency health care, public health and safety, law enforcement, etc.). But even these programs will run with minimal staff.

Mandatory programs not funded by appropriations, such as Social Security, Medicare and Medicaid, would largely be unaffected as well…unless their administration were impeded by furloughed employees. Keep in mind that while your Medicare payments are not funded through the discretionary appropriations process, the people who process your claims and send out reimbursements are. (For a more detailed overview, see this recent report by the Congressional Research Service.)

The upshot is that if you’re planning to retire on October 1, you may want to rethink things. Federal retirement security and social insurance programs may not function as intended.

Even if you don’t care about any of these things, remember it’s always more expensive to shut things down and start them back up than it is to keep them running. (That’s why factories run 24/7.) The 1995-1996 shutdown incurred an estimated $1.4 billion in additional federal costs. That’s about $2.2 billion in 2013 dollars.

In short: A government shutdown is a wasteful and inefficient move that hurts a lot of people.

But as a silver lining, a brief shutdown might serve as a useful reminder of the popular services and functions government provides, which are all too often taken for granted.

UPDATE: Read Andrew Fieldhouse’s second post in our series on the impending government shutdown. We will update with a link to new posts here.

Andrew Fieldhouse is a former fellow at The Century Foundation, who primarily wrote about U.S. federal tax and budget policy and the role of fiscal policy on economic recovery.