Americans increasingly live in high-poverty neighborhoods, as documented in my analysis released last December. That report was based on U.S. Census and American Community Survey (ACS) data through 2011. The latest ACS tract-level data has recently been released based on monthly surveys conducted from 2008 to 2012. This is the first ACS tract-level data to be collected completely after the peak of the housing boom.

With this new data, we know the situation is getting worse–quickly.

About 12.4 million Americans live in economically devastated neighborhoods—census tracts where at least 40 percent of residents are at or below the federal poverty line–according to the 2008-2012 data. That figure represents an 11 percent increase as compared to the 2007-2011 ACS data, and a 72 percent increase in the population of high-poverty neighborhoods since the 2000 Census.

Just over 4,000 neighborhoods (5.6 percent of all U.S. census tracts) now exceed the 40 percent poverty threshold, up from 3,800 since the last ACS data was released in 2011. The increase is widespread: the number of high-poverty census tracts increased in thirty-six states.

More high-poverty census tracts mean more poor adults living in dangerous neighborhoods, with less access to the jobs they so desperately need. While our cities are still centers of employment regarding high-skill jobs, the largest number of and fastest growth in jobs for low-skill workers are found in the suburbs.

As a result, the poor, particularly the minority poor, suffer from a spatial mismatch separating them from employment and advancement opportunities. 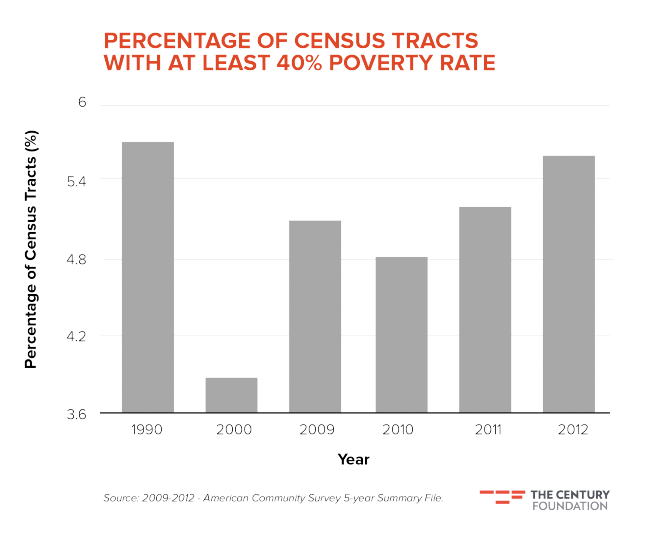 Concentration of poverty has implications for educational outcomes. After all, schools are largely creations of their surrounding neighborhoods. When poor families reside in neighborhoods apart from middle- and upper-income families, their children are likely to attend schools separate from those of more-affluent children.

While some inner-city schools are successful against all odds, many succumb to the overwhelming difficulties present in high-poverty neighborhoods, resulting in low academic achievement and high dropout rates. These outcomes, in turn, limit social mobility and increase income inequality.

While there is still debate about the extent to which concentrated poverty affects school performance and job attainment, an increasing body of evidence shows that living in economically devastated ghetto or barrio neighborhoods harms the poor. They are deprived of the advantages found in middle-class or better neighborhoods–safe streets, good schools, good connections to the labor market, and other public amenities.

There are no easy solutions to the problem of concentrated poverty, but my colleagues here at The Century Foundation provide a number of suggestions for tackling it.

On the education front, Richard Kahlenberg and Halley Potter argue to increase socioeconomic diversity in K–12 education, both in traditional public schools and in charter schools.

Last month, Stefanie DeLuca presented her research on a program in Baltimore, Maryland, that is successfully moving some residents out of high-poverty neighborhoods and into racially and socioeconomically diverse suburbs.

In the long run, however, we need to break down exclusionary zoning and suburban sprawl which fuel the increasing concentration of poverty by leaving the poor behind in central cities and inner-ring suburbs.

As the recent data shows, concentrated poverty is worsening, and with it, the terrible effects it has on neighborhoods and families.

Paul Jargowsky writes about inequality, the geographic concentration of poverty, and residential segregation by race and class.